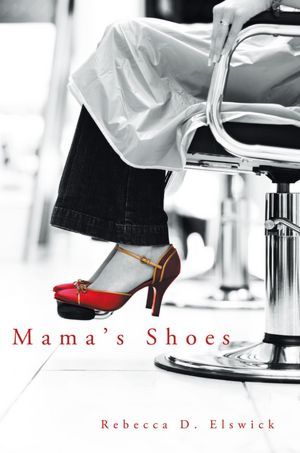 What was your intention for the cover?
I wanted the cover to reflect two things:

How did you create the cover?
I looked at thousands of pictures! The one I found that I wanted to use was perfect except for the color. It was a color picture and the shoes were the wrong color. Since I teach photojournalism, I knew my way around Photoshop, so I made the picture black and white and the shoes red so the person looking at it would be drawn to the red shoes.

Is there anything you would change?
No.

What do you think the cover says about your book?
My cover says this is a book for women about women. It has the red high heels of a care-free, lifestyle juxtaposed with the beauty shop chair depicting the working class woman. The cover should be the pictorial synopsis of your book and I wanted to create that for the cover of Mama’s Shoes.

By the time Sylvia Richardson is eighteen, she has buried her parents; given birth to a daughter; and become a widow. It is 1942, and World War II has destroyed Sylvia’s dream of dancing in red heels through life to the melody of a Hank Snow record. Instead, she is raising her daughter, Sassy, alone in the coal mining town she vowed to leave behind.

By 1955, thirteen-year-old Sassy has been brought up on a stiff dose of Mama’s lessons on how to be a lady-even though Mama drinks, smokes, and dates a myriad of men. But everything changes the day a woman accuses Sylvia of trying to steal her husband, forcing Sassy to come to terms with her Mama’s harsh teen years. For Sylvia, only the support of kith and kin can rescue her from her mistakes.

Spanning twenty years, “Mama’s Shoes” is a haunting saga of love, despair, and forgiveness as a cadence of female voices weaves a spell of mountain lore and secrets, defines family as more than blood kin, and proves second chances can bring happiness.

My Thoughts: I think the cover reflects the era of the book setting quite well, and definitely says that this is a woman’s lit story. I like the pop of red on the shoes, but wish the title font was just a bit bigger.