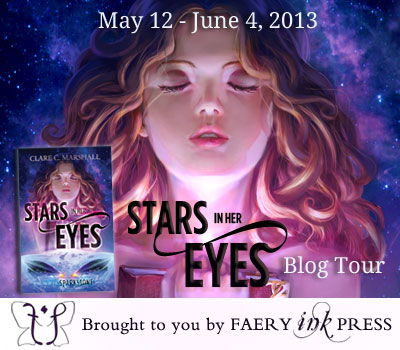 As part of her blog tour for Stars In Her Eyes, today I have a guest post by Clare Marshall entitled Getting Over the Hump: Finishing a Writing Project.

I look down at the dishes. I’ve got two things left to do: wash a pot, and wash a bunch of forks and knives that have sunk to the bottom of the sink.

To my left, there’s a bunch of bowls, plates, and utensils that need to be dried.

I take off my gloves and I grab the towel, abandoning the pot and the unwashed utensils to increasingly dirty soapy water in the sink.

Like washing the dishes, my problem with writing is that I will often stop at the 90% mark.

I’m not sure why this is. Hitting the 90% mark on any project should mean, “Hey, I see the finish line, the end is nigh!”

And then I take a break. A loonnnnng break. So much of a break that my anxiety starts kicking in, and I start making schedules just to satisfy myself, just to tell myself that I was productive today. It’s only when I’m getting down the wire, or when I’ve exhausted another activity, that I go back to my important writing project.

With writing Stars In Her Eyes I had this problem. I got caught up in my other freelance work that I allowed myself to leave the manuscript at an unfinished place, when I knew that if I spent a couple hours on it, I could bring it to a place where I would be satisfied. But I kept putting it off. I kept prioritizing more “important” tasks over something that I could’ve finished quite easily.

It’s easy to “give up” when you’re so close to the end, whether you’re doing dishes or you’re writing a book. But this is the time when you have to push the pedal to the floor. You’re so close to finishing, you have to remind yourself how great you’ll feel once the project is done! You can hit save, you can brag to yourself and your friends that you’ve completed the manuscript, you can finally set it aside for a few days before going at it again for a second round. Of course, you can do all of these things when the manuscript is at 90% completion–but you’ll only be fooling yourself into thinking you’re done.

Did I finish doing the dishes? I dried a couple before forcing myself back to the task of washing the pot. There’s nothing quite so satisfying as lifting up the drain stopper and hearing the water gush down the pipes.

Clare Marshall grew up in rural Nova Scotia with very little television and dial up internet, and yet, she turned out okay. She has a combined honours degree in journalism and psychology from the University of King’s College, and is a graduate from Humber College’s Creative Book Publishing Program. She founded Woulds & Shoulds Editing and Design in 2010 for self-published authors looking for quality editing and design services. When she’s not writing, she enjoys playing the fiddle and making silly noises at cats.

Stars In Her Eyes (Sparkstone #1) by Clare Marshall
Published by Faery Ink Press on May 13, 2013
Genres: Science Fiction, YA
Find the book: Amazon, Smashwords, Goodreads

Dream your own death.

Welcome to Sparkstone University, where some students are more gifted than others.

When Ingrid learns she’s been accepted at the hyper-secretive Sparkstone University, she is sceptical. It’s an honour to attend, apparently, and yet barely anyone has ever heard of the place.

And everyone seems a little too happy that she’s there: especially when she meets Sunni and her group of friends. They seem to already know Ingrid. As if she was expected. Expected to save Earth from an imminent alien invasion. Like she has superpowers or something.

As if magic and mutations exist. As if aliens are really planning to attack.

That just sounds ridiculous. There’s no such thing.

Review: Night of the Purple Moon