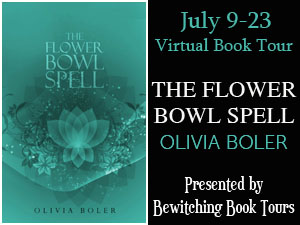 As part of her blog tour for The Flower Bowl Spell, I have author Olivia Boler here to answer a few questions.

I love the cover design. What input, if any, did you have in the design?

Thank you so much! I love the cover too. I definitely had input. My cover designer, Fena Lee, is a freelancer, and she will create up to three images for each book, but before she does, she has a questionnaire that gives her a sense of what the book is about and what the author imagines for the cover. Because the flower referenced in the Flower Bowl Spell is a lotus, I asked her to create an image with a lotus blossom. I think she did an amazing job.

Your main character is a Chinese American Wiccan. Is this based on your life, or someone you know?

Like Memphis Zhang, I am mixed race, although I am half Chinese and half Caucasian, while Memphis is three-quarters Chinese and one-quarter Caucasian. I am not a Wiccan, and I’m not religious. I did, however, once attend a Samhain potluck, where I didn’t know anyone. I had read about a Wiccan priestess in my local paper, and she had mentioned the celebration, so I went out of curiosity. Growing up in San Francisco, which is a very diverse city, I’ve always been fascinated by race and culture. So I noticed that most of the people attending the potluck were white. There were maybe two or three Rastafarian-ish individuals. And then there was this one Chinese woman. I thought that was really interesting. She was so “normal” looking, wearing plain jeans and a black turtleneck. I thought it would be fun to explore the perspective of an Asian person who follows a religion with Celtic roots.

In the late 1990s, I did some research on Wicca because I saw it popping up more and more in magazine articles, movies, TV, etc. I incorporate some of the rituals and beliefs that I learned into the writing of The Flower Bowl Spell. My goal was to build a “real world” like the one I had researched where truly supernatural, fantastical things happen, but they don’t happen for everyone.

What was the hardest part of writing this book?

Plotting. I come from a writing background that builds up characters and then those characters, once fleshed out, take the writer on a journey, usually inward. But I wanted to write a modern fairy tale that’s funny, full of adventure as well as danger—with well-developed characters. In a way, every novel is a mystery— not in a whodunit sense, but something has to get solved, something has to get answered. As I was drafting the novel, I found myself writing all of these mysterious occurrences—the sudden appearance of fairies, the arrival of the little girls, the strange clothes-wearing ducks and inanimate objects coming to life—then I had to tie it all together in a coherent way. Good fun!

What was your favourite part of writing this book?

I love writing dialog. That’s always been something I enjoy, letting the characters just yammer on, their voices literally emerging. And I liked writing about Tyson. He’s a complicated character, and Memphis’s feelings about him are complicated, too.

Thanks so much for being here today, Olivia.

About Olivia Boler
Olivia Boler is the author of two novels, YEAR OF THE SMOKE GIRL and THE FLOWER BOWL SPELL. Poet Gary Snyder described SMOKE GIRL as a “dense weave in the cross-cultural multi-racial world of complex, educated hip contemporary coast-to-coast America…It is a fine first novel, rich in paradox and detail.”

A freelance writer who received her master’s degree in creative writing from UC Davis, Boler has published short stories in the Asian American Women Artists Association (AAWAA) anthology Cheers to Muses, the literary journal MARY, and The Lyon Review, among others. She lives in San Francisco with her family.

Journalist Memphis Zhang isn’t ashamed of her Wiccan upbringing—in fact, she’s proud to be one of a few Chinese American witches in San Francisco, and maybe the world. Unlike the well-meaning but basically powerless Wiccans in her disbanded coven, Memphis can see fairies, read auras, and cast spells that actually work—even though she concocts them with ingredients like Nutella and antiperspirant. Yet after a friend she tries to protect is brutally killed, Memphis, full of guilt, abandons magick to lead a “normal” life. The appearance, however, of her dead friend’s sexy rock star brother—as well as a fairy in a subway tunnel—suggest that magick is not done with her. Reluctantly, Memphis finds herself dragged back into the world of urban magick, trying to stop a power-hungry witch from using the dangerous Flower Bowl Spell and killing the people Memphis loves—and maybe even Memphis herself.

One Response to “Interview: Olivia Boler”