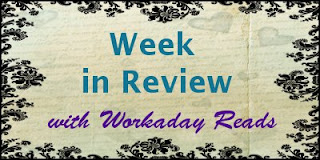 I’ve had a very reading filled week. I finished 5 books this week, which felt really good. I am way behind in writing reviews and author features, but that seems to be pretty standard.

I think I’m finally back into the regular routine of being at home and going to work and everything “normal”. I have been having a really hard time since coming back from vacation. Every day feels like a struggle where I am forcing myself to go to a job that I don’t like. And that is never fun.

Summer seems to be here in full swing. The temperature has been soaring all week, and my apartment is cooking hot. My son is a regular sweat factory, but still wants to snuggle up with you, which feels really gross and hot. But still nice when he’s giving hugs and kisses, even while cooking me.

I received a bag of books unexpectedly from Free Press, an imprint of Simon and Schuster. In it were the following books:

The Longest Way Home by Andrew McCarthy
Shelter: A Novel by Frances Greenslade
The Book of Mormrn Girl by Joanna Brooks

Y: A Novel by Marjorie Celona
Some Kind of Peace by Camilla Grebe and Asa Traff

I also received an unexpected package from Penguin Canada with the following books:

Pyg: Memoirs of a Learned Pig by Russell Potter
Y: A Novel by Marjorie Celona

Yes, I did get the same book from two different publishers in the same week. Obviously someone really wants me to read this book.

Winners:
I had several giveaways end this week, so there are a few winners to announce. Apparently I had a few problems with giveaways ending early, and for that I apologize. I’m still trying to figure Rafflecopter out. I think I have it figured out for next time though.

Cool stats for the week:
Most popular post: “Clear Your Shelf” Giveaway Hop
#1 referring site – shaynagier.com – Even with the giveaways.
Top 5 search keywords: