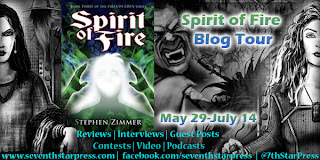 As part of his blog tour for Spirit of Fire, today I have a guest  post from author Stephen Zimmer. Enjoy.

My Approach: The Balance of the Familiar, the Unfamiliar, and the Inventive

Speculative fiction, that wonderful area of literature that entails science fiction, fantasy, urban fantasy, horror, steampunk, and so much more, is in a very exciting phase that allows for all manner of ideas to be indulged within genres, as well as the crossing of genres. The boundaries are no longer rigid, and writers are free to explore in ways that were largely frowned upon in the past.

When it comes to fantasy, there is an explosion of creativity in terms of the settings and cultures in fantasy stories. No longer are settings predominantly western European in nature, and you can find fantasy tales with roots in cultures spanning the globe.

As an avid medieval history buff with a comprehensive approach (I.E. I love studying medieval periods in Europe, Asia, Africa, South America, etc) , this is a wonderful development as I’ve always wanted to explore a diversity of cultures and settings within a fantasy story. Yet at the same time I don’t believe in shunning the kinds of settings and cultures that were predominantly featured in the past. So when it came to my own series in epic fantasy, the Fires in Eden series, I sought to establish a balance between three areas; the familiar, the unfamiliar, and the inventive.

What do I mean by this? I wanted to have a story that really explored a world thoroughly, one in which the reader gets to adventure within a wide variety of settings and cultures. Some would come from cultures and settings more commonly found in fantasy, some would derive from uncommon cultures and settings, and still others would be more purely inventive in nature.

I will use three examples from my series to illustrate what I am talking about in regards to these categories. The first two involve a bit of a “what if” kind of scenario that I have often thought about, in fact.

As many know, the Vikings did come into contact with the tribal people of North America, and short- term settlements were founded in parts of what is today Canada. The Norse accounts in the Sagas and the short-lived nature of the settlements strongly indicate that relations between the Viking explorers and the tribal people they encountered were not so friendly in nature. With the very small populations of Vikings in Greenland, and the challenges of reaching North America, there was little to sustain regular contact and the attempts to establish a foothold in North America by the Vikings came to an early end.

In the Fires in Eden series, I wanted to explore a scenario where a Viking-like culture had a sustained history of contact and interaction with a tribal culture. This gave birth to Midragard and the Five Realms, which entails prime examples of a “familiar” setting and an “unfamiliar” one.

Midragard is based strongly upon Viking culture. Like the Vikings, the Midragardans are exceptional seafarers and warriors who became known for their travels and raids across the years. Midragard itself is shaped into three main areas, whose geographical outlines echo three primary martial implements embraced by their culture; sword, axe, and shield. They have large market towns that will bring to mind the places like Hedby, Birka, and Kaupang in Viking history, along with fortress camps that have echoes of Trelleborg and Fyrkat in our own world. For the most part the Midragardans live in large estates or village settlements, and the great jarls and kings among them dwell in impressive timber long halls that reflect the considerable skills of their artisans in wood-carving.

Yet the Midragardans have their own unique aspects within Ave. For one example, they raise and train Fenraren as mounts. Fenraren are a type of Skiantha, which are four-legged, winged creatures that inhabit many of Ave’s lands, reflecting a number of types. The Fenraren have the appearance of wolves in their bodies, and I chose this to honor the place that wolves have within Midragardan culture. The veneration of the wolf is reflected further in a mysterious Order that gets introduced in Dream of Legends, and is much further defined in Spirit of Fire. This Order entails the Ulfhednar, or “wolf-coats”, and the Berzerks, or “bear-shirts”, to give you a little hint of things to come.

Thus, the Midragardans are Viking-like, and certainly Viking culture has been seen often in fantasy literature, but I have worked to put my own twists and fresh elements into the mix (with things such as the Fenraren, etc.).

Now let’s turn our attention to the Five Realms, reflecting a culture and setting that previously has not been very commonly encountered in fantasy literature, to say the least.

The Five Realms are influenced by the Iroquois of the Five Nations period (the confederacy was eventually expanded to six nations with the addition of the Tuscarora in the early 18 th century). The Five Realms itself is located to the east of Gallea, the boundary line demarcated by the beginning of dense, rolling woodlands that reach all the way to the sea on the western boundary of the tribal lands.

Like the Iroquois, five tribes make up a confederation which is represented at a council of sachems. The Grand Council of the Five Realms involves fifty sachems appointed by the clan matrons, as the power structure within the Five Realms culture is very matriarchal in nature.

The people themselves live in hill-top villages containing longhouses divided into family-based compartments. The villages are surrounded by timber palisades. Corn, beans, and squash are the primary crops, and hunting woodland game and fishing are other primary sources of food.

As you can see, all of this strongly echoes the Iroquois people of our world, but there are differences. Like the Midragardans, the tribal people of the Five Realms have a type of Skiantha dwelling in their lands that they have named Bregas. A Brega has a bearish appearance in the way that the Fenraren have a wolfish one, and the bear motif reflects the venerated position that bears have within the tribal culture.

There is also a significant degree of interaction between the people of the Five Realms and more mysterious elements within their forests, such as the Little Ones. These entities could be said to be fairy-like beings that inhabit the woodlands and interact with the tribes to the degree that the tribal people have a dedicated ritual group, or masked fellowship, oriented upon the Little Ones.

As you can see, the Five Realms, like Midragard, has its own unique elements, but it is strongly rooted with a culture from our world, just one that has not been encountered as often as the Vikings have been in fantasy literature.

So that covers two of the categories, but what about the third, the one pertaining to inventive cultures? The tribes of the Five Realms have legends of creatures called the Stone Hides, like the Iroquois do, and it is these creatures that I will turn to as an example of an inventive culture and setting within the tapestry of Ave.

While the idea of the Stone Hides of Iroquois legends inspired the initial idea of what became the Unguhur, the race took on an identity of its own as I imagined them and brought them into the story . The word itself derives from the German word for “Monster”, which is what the Unguhur would probably seem like to most who encountered them by their appearances.

Their skin has a rough texture and the hue of grayish stone, which is the reason why they were called Stone Hides in the Five Realms. They are exceptionally tall, easily seven feet in height on the average, with broad bodies and pronounced muscularity that gives them a very powerful physical strength.

Reclusive, they took to dwelling in subterranean environments ages ago, and want little to do with the world of humans. They are content fishing and cultivating impressive mushroom/fungal forests within caverns. They also go on hunting forays, and the results of one of these trips is depicted very vividly in Dream of Legends!

In terms of their dwellings, they have carved what is effectively a terraced city out of the stone of a great cavern, which contains a fairly large lake. This city, Oranim, might bring to mind the impressive cliff dwellings of the Anasazi of our world, but the environment is very unique. For lighting, they have cultivated a type of bioluminescent fungus, which gives off a blue light that casts their world with a slightly ethereal look to the eyes of outsiders.

The Unguhur culture and the Unguhur themselves reflect as much depth and detail as do the Midragardans and tribal people of the Five Realms, only there is no direct historical influence/ foundation deriving from our world. They are, unquestionably, a good example of one of my invented cultures.

These three examples show what I mean in regards to encountering the familiar, unfamiliar, and inventive within Ave. This kind of balance between the three types, I feel strongly, spans the series, and it is the right approach for the kind of series I set out to write back in the mid 1990’s.

There is no “right way” or “wrong way” to construct the world that a fantasy series is set within, in terms of these areas. I merely hope that readers enjoy my particular approach, as they adventure across Ave and discover its wide variety of lands and inhabitants.

About Stephen Zimmer
Stephen Zimmer is an award-winning author and filmmaker, whose literary works include the epic urban fantasy series The Rising Dawn Saga, as well as the epic medieval fantasy Fires in Eden Series.

In addition to his busy writing and filmmaking endeavors, Stephen appears regularly at conventions, bookstores, and a range of other events, maintaining a thorough, year-round personal appearance schedule that is one of the most active in the industry.

Deep Within Everyone, There is a Spirit of Fire…

A maelstrom of war engulfs lands resisting the designs of the Unifier to bring about a new order, of a kind that has never existed within Ave. Battered by a massive invasion force from Gallea, the tribal people of the Five Realms and their Midragardan allies are being driven eastward, towards the sea, while the Saxan lines are wearing down ever thinner on the Plains of Athelney.

Time is running out quickly, as an ancient creature of legend soars through the skies with a brave young Saxan. They carry the desperate hopes of two realms sorely beset by a voracious enemy. Diabolic entities conduct a great hunt, as a malignant darkness deepens across all of Ave. Exiles from another world must gain refuge, or find themselves ensnared by the long reach of the Unifier. The very nature of creation itself stands in the balance.

It is a time when the honor and fortitude of many are put to the test, and terrible prices are paid for resisting great evils. It is also a time of awakening for many, old and young alike, some of whom may yet discover the spirit of fire that lies within.

The third installment in the Fires in Eden series, Spirit of Fire is richly imagined epic fantasy with a diverse ensemble of characters that offers a new world to explore for readers who enjoy large-scale tales along the likes of George R.R. Martin, Brandon Sanderson, Steven Erikson, and J.R.R. Tolkien.