Today I have a guest post by John Vorhaus, author of Lucy in the Sky. His guest post is titled “Winston Churchill Said”. Enjoy.

Hi, everyone. John Vorhaus here, author of the new “hippie lit” novel Lucy in the Sky. It’s a sixties trip about a teenage boy who wants to be a hippie in the worst way and gets his wish when his incredibly hip, incredibly hot, incredibly worldly girl cousin rolls into town. It’s a terrific book and all, but that’s not really why I’m here today. (Okay, it’s a little of why I’m here today – to encourage your visit for your free taste.) I’m here to talk about Winston Churchill, who had this to say about writing.

Writing a book is an adventure. To begin with, it is a toy and an amusement; then it becomes a mistress, and then it becomes a master, and then a tyrant. The last phase is that just as you are about to be reconciled to your servitude, you kill the monster, and fling him out to the public.

It kills me to think that Winston Churchill, Mr. “We have nothing to fear but fear itself” himself, should have the same adversarial relationship with writing as I do. Apart from the times it’s fun, it’s a struggle: days of pure joy when the words come flying off the page and splatter all over everything; and then those endless slogs through thickets of story problems or research or rewrites or whichever part of the process makes a writer’s spirit sag. I have one friend who’s devastated by endings. She just can’t seem to write the climax, even when she knows she knows it exactly. Another friend hates rewrites like a cat hates baths. For me, it’s picking up again after a long layoff. I have a bear of a time getting back in the groove, getting that engine chugging again. Lost momentum, you could say, is the part of the process that’s my master.

Right now I’m thinking it would be a worthwhile exercise to break down ol’ Winnie’s quote and investigate which particular part of the writing process is my toy and amusement, my mistress, my master and so on. If you’re a writer as well as a reader, you can play along at home, and I encourage you to do so, for my writing insights won’t be half as valuable to you as yours.

Toy and amusement: Not long ago I hatched the harebrained scheme to create a thousand new words by Christmas. In the heady early days of the project, it was certainly my toy and amusement, quickly yielding such treasures as harasshole (an authority hard-on with petty power), panticlimax (a dry hump), hactivity (the entire oeuvre of Dan Brown), and what I thought must’ve been hundreds of others. Then I did a quick count. Ah, 23 down, 977 to go. Thank goodness I didn’t specify Christmas of which year, but in any case I have a feeling this project will be with me long after the amusement fades away. (You can track its progress through Facebook or my Twitter feed.)

Mistress: Of late I have been writing episodes of an original situation comedy, entirely on spec and fully as a labor of love. Having batted out six episodes in six weeks, I’m in the full first blush of a crush, where everything I look at or think about or hear of seems like a story to me. I know it won’t last, but right now I feel like I’m bedding down with Lady Creativity herself, and am determined to snuggle with her for as long as she will have me.

Master: As I’ve already said, lost momentum is my master, in the sense that it masters me, masters my best intentions. I wish it were my master in the sense that it would order me back up to speed. Maybe that’s how it was for Winston: His books commanded him to write and he wrote. Me, I find I perform better with a mistress than a master. I’m not being flip. I just mean that I have no problem putting in the hours when I’m in love with the work and everything’s flowing free and easy. When I bog down, well, it’s not like I give up, but I certainly wish the hard problems weren’t so hard.

Tyrant: A friend called me up just now and suggested a round of disc golf. I said I couldn’t go – my boss wouldn’t let me. He said, “What boss? You have no boss.” But I do. My boss is my drive, my urgent need to write that transcends tired, transcends doubt, transcends story problems, plot problems, writer’s cramp, even the Lorelei-like temptation of disc golf. The part of me that says, “You must write now,” that’s my tyrant. Tyrannized though I may be, I would certainly be less well off without it.

Beast: I have no trouble killing the beast and flinging him to the public. When I get down to the point where I’m changing a phrase from, say, “couldn’t be bothered” to “could not be bothered” and then back again, I know it’s time to kill and fling. Look, the work’s not going to be perfect – no work ever is – and the typos I find in the printed book will drive me a little bit nuts. By and large, though, I don’t have much of a problem with the beast. I just turn my back. And that’s what I mean when I say that apart from the fun parts it’s a struggle. Maybe it’s the other way around. Apart from the struggly bits, it’s all fun.

In closing, it’s worth noting that Winnie has nothing to say about defeat. Nowhere in this quote do we get the impression that he’s about to give up. Nor did he ever. Wikipedia (the agreed-upon source of consensus reality) says he wrote 43 books. And painted. And built. And still found time to win a war. Sometimes thinking about Winston Churchill bums me out. He accomplished so much. Me, I coined the word pawnography. Then I think, well, he did the best he could, I’m doing the best I can, so in that sense we’re about equal. Anyway, comparisons are odious. 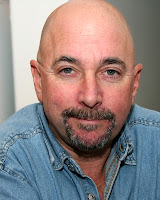 About John Vorhaus
John Vorhaus has published five novels and many books on poker. His comedy writing text, The Comic Toolbox, is considered a classic how-to book for writers, and will be making money for someone long after he’s dead, buried and gone. He tweets for no apparent reason @TrueFactBarFact and secretly controls the world from www.johnvorhaus.com. He is also on Goodreads.

A coming-of-age tale set in Milwaukee, Wisconsin, in 1969, Lucy in the Sky lightly touches on such weighty issues as the meaning of life, the purpose of art and the existence of God. For those interested in answers to The Big Questions or just keen to revisit a simpler time, Lucy in the Sky promises a fun and compelling trip – and that’s trip in every sense of the word.

Gene Steen is an earnest, intelligent, truth-seeking teen stuck in the cultural wasteland of his suburban home. He wants to be a hippie in the worst way, but hippies are scarce on the ground in the forlorn Midwest of Gene’s 15th year. Then, propitiously on the Summer Solstice, his life is turned upside down by the arrival of his lively, lovely, long-lost cousin Lucy. She’s hip beyond Gene’s wildest dreams and immediately takes him under her wing. Lucy teaches Gene that being a hippie isn’t about love beads and peace signs, but about the choices you make and the stands you take. Yet for all her airy insights into religion, philosophy and “the isness of it all,” Lucy harbors dark secrets – secrets that will soon put her on the run, with Gene by her side.

Lucy in the Sky resonates of such classics as Summer of ’42 and Zen in the Art of Motorcycle Maintenance, and invites the reader into a richly detailed vision of the ‘60s, as realized by Vorhaus’s sure-handed prose and authentic sense of place and time. With frank talk about sex and drugs, Vorhaus pulls no punches about the realities of the era, yet delivers an uplifting message about personal power and the path to enlightenment. A rewarding read for young seekers and old geezers alike.