Today I have a guest post from Gregory G Allen, author of Patchwork Me.

Hollywood loves to show us movies of men becoming women to do something different with their lives, get a certain job, get back in touch with their ex wife. We’ve seen them and we know them. But I tend to think getting in touch with my inner female involves much less lipstick and stockings. I’m a writer. And I’m a writer that doesn’t always play by the rules. The ‘write what you know’ could get plenty tiring if we all went around writing the same story over and over. So I choose to play with my genres. Listen to characters as they speak to me in my head. Attach myself to different stories where I can show people in diverse situations and how they work through a certain adversity. I’ve written on addiction, religion, sexuality, autism – and all of those in different formats.

One of the nicest comments I ever received as a writer was when I wrote a musical about a biracial woman in the south during the 60s and an African-American person said to me “how did you know that’s how we felt? That there is a pecking order based on skin tone in the black community?” Another was on a radio interview with my debut novel and the female interviewer told her listeners how well I had captured the wife in the story. A certain pride mixed with humility can fill you when you believe you ‘got it right’.

I come from the world of being an actor and a director: all about placing yourself into the mind & character of someone else. I chose to use that same technique in my writing. People are people and each of us have different things that make us tick. No matter if we are female, male, married, gay or a priest: there are still individual characteristics of each of those groups. The moment I started to write Patchwork of Me, I knew I was writing the story about a woman. She had to be a woman. She spoke to me about her past in foster care and how that past was causing her to get stuck in her present with no strong future in sight. I grew up in a family that had foster children living with us, but they were always boys. I’ve never lived in Arizona, but something about that land when I’ve visited made me know I wanted to set my book there. And I’ve traveled – a lot. So a book that has a road trip where other characters could be introduced enticed me to write it. These are elements that surrounded me that added to the book, but Sara Butler always dictated to me who she was going to be, how she spoke, how she fought with herself in her head and would say things she’d never say aloud. How each of us change who we are based on those we are around and in her case – being with her closest friends means she can sometimes speak much more naughty than when she is attempting to impress a man she is interested in. Those characteristics where choices I made as the writer with the aid of this character that was telling me this was who she was.

I love to read all types of books. I’ve read female authors and male authors and must admit, I never stop to say “how could a man write She’s Come Undone?” (Which happens to be one of my favorite books.) I think a good book pulls us into the characters enough where we forget about the sex of the person writing it. I’m sure there will be some that may feel my female doesn’t ring true to them. And I’m ‘big-boy’ enough to accept that kind of criticism. For now, I’m thrilled that early reviewers have loved the book. That females have written to me saying “we want the gay best friends that Sara has in the book.”

And I’m especially happy for the multitude of women in my own life who helped me without even knowing they were on the journey that I took in patching together Sara Butler. 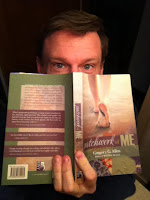 About Gregory G Allen:
Gregory G. Allen was raised in Texas, but now calls New Jersey home. His mother (an avid reader) passed on the love of written words to Gregory. He is an author, playwright, and composer and manages an arts center on a college campus. He has had several short stories published, is an award-winning musical theater writer with over ten original musicals produced, and contributes articles and blogs to online sources.

Patchwork of Me by Gregory G Allen

A product of the foster care system, Sara Butler spends her early thirties hiding from her past while striving for a normal life with her small group of quirky friends in Arizona. Seeking treatment for an invisible rash and abnormal dreams, her therapist helps her unlock a heinous past that she is unsure she wants to open. To patch her life back together, she realizes she must travel across country to Maine to confront that past in order to plan for a future.