Today I have a guest post from Zrinka Jelic, the Canadian author of Bonded by Crimson, about a setting that appears in her book.

I am delighted to be here today as your guest blogger.

I’d like to talk about the Sea Organ and solar circle in the town of Zadar, Croatia, where the below excerpt takes place. I posted this on my blog and one of the comments I’ve received is that it was a beautiful scene, too bad the Sea Organ does not exist and how she truly wished it did. Maybe it does sound too romantic, but see for yourselves.

The Sea Organ is seventy meters long with about thirty five organ pipes built in concrete. The pipes are located so that the sea water and wind movements produce sounds that are heard so that it achieves a communication with nature and promotes a unity of architecture and environment. As sea forces and energies are unpredictable in terms of tides and winds, this organ offers never-ending concert of numerous music variations in which the performer is nature itself.

See the Sea Organ in this short video: http://www.youtube.com/watch?v=qJWldNdG4Lo

I don’t want to get into the description for the solar circle. It’s just way too technical, I don’t understand it myself. See the Greeting to Sun here: http://www.youtube.com/watch?feature=fvwp&NR=1&v=xVkMObgOq8U 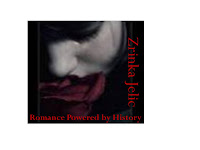 About Zrinka Jelic
Zrinka Jelic lives in Ontario, Canada, with her husband and two children. A member of the Romance Writers of America and its chapter Fantasy Futuristic & Paranormal, as well as Savvy Authors, she writes contemporary fiction—which leans toward the paranormal—and adds a pinch of history. Her characters come from all walks of life, and although she prefers red, romance comes in many colors. Given Jelic’s love for her native Croatia and the Adriatic Sea, her characters usually find themselves dealing with a fair amount of sunshine, but that’s about the only break they get. “Alas,” Jelic says, with a grin. “Some rain must fall in everyone’s life.”

Bonded by Crimson by Zrinka Jelic

Love isn’t in the cards for her…

After her short failed marriage, Kate tries to rebuild her life and takes a position as a nanny to three small boys. She quickly grows to love them, but their father, terrifies her, while igniting a passion she didn’t know she possessed. Disturbed by his distant manner with his sons, Kate struggles to make him more involved in the boys’ daily lives. Her efforts are mysteriously supported by an entity that cannot really exist. Or can she? And if she does exist, is she really trying to help Kate, or just take over her body?

But when he deals the hand, all bets are off…

Six years after his beloved wife passed away, Matthias is still trying to become the father she wanted him to be. Not an easy task for a three-centuries-old immortal. His search for the ultimate nanny ends when Kate Rokov stumbles to his home and into his arms. The immediate attraction he feels for her seems like a betrayal of his dead wife, a love he’s harboured for over three hundred years. But when Kate is stalked by a deadly stranger, life he clung to in the past begins to crumble and break down. Can Matthias learn to trust and to love again in time to save his family from disaster, or will his stubborn pride destroy everything worth living for?

Matthias tucked a stray wisp of her hair behind her ear. She closed her eyes and allowed herself to surrender to his caress. His silence spoke to her louder than words.

“Let’s go for a walk. You choose where.” He grabbed her by the hand and pulled her with him.

The crushed pebbles crunched under her feet “I’d like to see the famous Greeting to the Sun.”

“You haven’t seen the solar circle yet?”

They walked hand in hand along the promenade. Silver moonlight washed over the calm water surface, soothing her soul. She drew in a deep breath. The salty smell of the sea filled her nostrils.

They arrived at the point on the promenade, where the people gathered to sit on the marble steps of the Sea Organ. Matthias stepped on the thick glass panels of the circle. An array of flickering fluorescent lights raced across the surface of the floor. “The panes absorb the energy from the sun and at night they create this colorful show,” he said.

She elbowed her way through the crowd. Cameras flashed all around her. “The circle is packed.”

“You must visit in the middle of the winter when the solar circle is empty.” He pointed to the wide marble stairs, leading straight into the sea. “Too bad the sea is calm tonight. When the waves push air through the pipes underneath those steps, chords are played by the world’s first sea organ.”

Calm water lazily hugged the steps. She smiled at the thought of how much she had longed to see this and now she was here. “Quite someth—”

A shove on her back propelled her toward the sea. Matthias caught her and wrapped his arms protectively around her.

“I beg your pardon.” The tourist spoke with a thick British accent.

“Please mind your step.” Matthias snapped. His sweet scent filled her lungs when he pulled her close.

“Will do mate.” The man said and turned back to his friends.

“Do you want to go somewhere else?” he asked, his arms surrounding her like a protective wall.

“No.” She slipped her arms around him, and he tightened his hold. With a sigh, she shut her eyes and melted into him. Soft music drifted to them from the distance. Somewhere, someone played a piano. Matthias swayed with her to the melody. She nestled her head under his chin, her weight supported by his arms. Seconds later, she realized the song she heard was meant for her alone. No piano player sat nearby caressing a melody from ivory keys. The music was in her head, as beautiful as a bird’s song on a spring morning.

He cradled her face with both his hands and pressed his forehead to her brow. His lips touched hers. She parted them, and his tongue plunged into her mouth. Butterflies had stirred in her stomach all night, but now they spread through her entire body. Since their first kiss at the Botanical Gardens, she’d thought of little else. Now she was like wax under his hungry mouth and gentle hands. With a soft nip on her lower lip, he ended the kiss and ran his lips along her jaw, leaving a trail of fire on her skin.

She frowned when his body shuddered. Did he have an allergic reaction to her lip gloss? When he buried his face in the crook of her neck, his gentle swaying reassured her. The song came to an end, and he stopped the dance.

“I must apologize. I got carried away.” His husky whisper sent another wave of shivers down her spine. “Please forgive me. My behaviour was inappropriate.”
“No, it wasn’t,” she whispered in hopes he’d kiss her again. He took her hand in his and led her away from the circle. “We should enjoy these last few hours of the night.” The lazy stroll back to her apartment building was excruciating. Her mind searched for some appropriate words to break the silence, but found none.

He paused at the front entrance. “Stay on the boat with me tonight,” he whispered, his voice husky with need. She bit her lip and shook her head.

“Are you sure?” He gave her a smile but she could see the disappointment in his eyes.

“Right now, I’m not sure of anything except that I’ll change my mind the second I step in my apartment.” She
looked up at the second floor balcony. “If the sleeping arrangements stayed the same, maybe I…”

She hoped he would understand. He should. After all, he came from a time when gentlemen were bound to respect a maiden’s honor, and ladies protected their virtue like treasured

“I’ll gladly suffer another night on the child-sized bunk, as long as I have you near.”