Today I have a guest post from Mona Karel, author of the upcoming Teach Me to Forget, about her thoughts on being in South California. 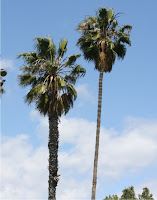 There is a Mediterranean feel to Southern California. I remember that from when I lived here for nearly twenty years. The hills rising one after another, covered with Spanish style houses look amazingly like paintings and photos I’ve seen of that part of the world. People might be spread out a bit more, after all California is not a small state, but the vehicles more than make up for that.

Thursday I landed in Long Beach, one of the last of the small SoCal airports, where you use a ramp to get on and off the plane. This wouldn’t be surprising in many parts of the country, but Long Beach airport services major cities and businesses. I use it whenever possible (i.e. whenever it’s cheapest) for that feeling of intimacy and the convenience of being in your rental car and gone in less time than it takes to find the rental car shuttle in most other airports.

It’s surreal being here. I keep wanting to reach for the telephone to tell Tom what’s changed, what looks different and what’s the same. But one of the reasons I’m here is to help hold two memorials for Tom. He grew up in Southern California and the only thing that moved him was a love of the high desert, and a pushy wife. We spent six years in New Mexico, and he reveled in the open spaces, the clean air, and the amazing vistas. His one wish, when he realized his body was not going to let him go on, was to see home one more time, and thus he was back in our house for three months. He did improve but alas not enough and eventually succumbed to cancer and diabetes, two hellish conditions.

I had intended to drive here from New Mexico but unfortunately the car needed body work first (something to do with the driver door not opening) and the repairs ended up being delayed. A last minute ticket was only marginally more than gas would have been, which is a sad commentary on our lives right now. So the dogs stayed behind, and a thirteen hour drive became a nearly three hour flight, broken up by a stop in Phoenix.

On Friday I attended the Saluki specialty held in his honor. A specialty is a dog show for one breed only, in this instance Salukis. Tom had been an active member of this club for longer than most of the people have had Salukis. His artwork fills the newsletters, most particularly his sketches and cartoons, drawn during meetings, especially the contentious ones. The club surprised me with a plaque honoring Tom’s service to the club, and after an incredibly soggy event, some of our friend’s met to share memories and hot food.

Today I’ll be back with the Orange County Chapter of RWA, sharing recent successes with my old writing friends, and doing my first book signing. I remember sitting up on Friday nights before the meetings, printing out name cards for the signing authors, and dreaming about the day I’d have my own name card. Last night I watched “Mona Karel” come out of Michelle’s printer, and realized I am now for sure a “real” author.

After the signing I’ll be meeting with Tom’s family, friends, and former students at a park in Lakewood to remember an amazing man, and celebrate a life too short. Then one more night spent among those who loved us, and back on a plane home to the high desert. California is an amazing state, full of charm, beauty and great diversity but it’s also full of far too many people for me. I can still navigate the freeways, taking the approach I used when riding a difficult horse, by sitting deep into the saddle, relaxing my back, and letting those more impatient go right on past. But it’s more of an effort than I generally admit, and I recall a desire to have a bazooka to open the way for me.

I’ve set both of my books so far in California, but in “My Killer My Love” the whole books is set in the old growth forest, and in “Teach Me To Forget” they leave San Francisco in the first chapter for Jonathan’s house in the woods. So far I haven’t written much set in cities, probably because living here for twenty years made me nuts enough, writing about it leads to stories about serial bombers and strange people. Not sure if I’m ready for that yet!

About Mona Karel
I remember writing a terribly earnest Gothic romance when I was in my teens, including the obligatory white nightgown in the portrait gallery scene. Fortunately my mother was efficient about cleaning out excess papers, and that story went the way of the dodo. I read voraciously but didn’t get back to real writing until my mid thirties when I discovered romance books and realized I had found my literary home. What I write stems from my characters. Arguments, actions, love scenes all stem from who they are. I suppose for me writing is like acting, without having to diet or put on make up. I hope you enjoy my stories as much as I enjoy writing them.

Teach Me To Forget by Mona Karel
Scheduled to be released by Black Opal Books on May 12. It’s a story of lives saved and love learned.

Her past was behind her…or so she’d thought.
Bethany Acton has come a long way from the day she was an abused child-bride of a dissolute jet setter. Now divorced and single, she writes for a lifestyles magazine, lives out of her motor home, and answers only to her boss—when he can find her. She has overcome her horrendous past and taken control of her own life. But when Jonathan Merritt, a rising star in wildlife photography, enters her world, she learns that control is a tenuous thing.

His past was despicable, but it hasn’t affected his future…until now.
Jonathan knows he has met the woman with whom he wants to spend his future, but first he must admit his role in her past. Afraid the truth will turn her against him, he tries to gain her trust and affection before confessing. But the longer he hesitates, the harder it becomes to tell her. Can Jonathan gain her love soon enough to forgive what he did, or will his past indiscretions destroy his only chance at happiness?