Hi Sarah! Thanks so much for having me on your blog today! This is so exciting! I love doing these blog tours, I swear; just when I think I can’t possibly write another blog, something else pops into my head and I’m like, “Oh, blog material!”

Like the other day, I was in Home Goods. As you know by now, I’m not a big shopper, but I have to admit that Home Goods has some pretty good things by way of kitchen gadgets and they’re cheap too. Cheap but sturdy. My mom bought my sister a set of metal measuring cups because she thought they’d be better than the flimsy plastic ones and man, these things can withstand anything! Even a three-year-old!

But I move off topic.

So as I’m wandering the aisles, I overheard something that gave me hope for the next generation. A mother was pushing her son in a shopping cart. That alone won points because any child loose in this store needs to be harnessed like a psychotic horse! One false move and there’s a cascade of lamps, picture frames, vases, baskets and cookware that will bury you since the people who work in Home Goods don’t seem to know the meaning of the term over-stocked. So anyway, the mother is pushing her son in this shopping cart. The child can’t be any older than say, six-years-old and he’s talking about bubbles and heat and how they pop the higher they float upwards.

The mother seems to be listening with half an ear because in between her son’s sentences, she’s saying, “uh huh” and “right” and “go on”. It seems pretty obvious that she’s not really paying attention UNTIL her son utters the beginning of a sentence like this: “So that means I gotta have—“

His mother immediately cuts him off and says, “No. It’s ‘I have to have’, not ‘I gotta have’.”

And her son then dutifully repeats what she said and then commenced with his theories about heat and bubbles.

I was so dumb-struck I nearly walked into a display of overgrown plants. It was such a profound correction of grammar. I was truly impressed and I can only hope that this boy, when he grows up, can appreciate the fact that his mother strove for him to be a well-spoken individual. 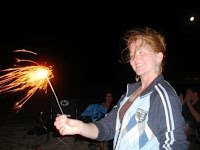 About Melissa Groeling
Melissa Groeling graduated from Bloomsburg University with a degree in English. She lives, reads and writes in the Philadelphia region and wherever else life happens to send her. She is a hardcore New York Giants fan and loves chocolate. Traffic Jam is her first young adult novel.

Traffic Jam by Melissa Groeling
coming May 2012
It’s about human trafficking and the impact it has on a young girl and her family.