Today I have a guest post from Empi Baryeh, author of Chancing Faith and Most Eligible Bachelor, with her story about why she reads romance.

Hi everyone and thanks for stopping by my guest post today. I’m excited to be here at Workaday Reads. Before I launch into my post, here’s a little about me. 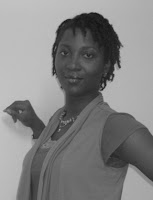 I’m an author of sweet and sensual African and Interracial romance. I live in Ghana, West Africa, where most of my stories are set. I speak French and a teensy bit of Spanish. I have two novels out: Most Eligible Bachelor, which came out in February and is available from Evernight Publishing and other online book retailers, and my latest release, Chancing Faith, an interracial romance available in Print and eBook.

As the title suggests, I am going to talk about why I read romance. Think about it; if you did a search on “why I write romance” you’re bound to come up with a long list of possibilities, because many romance authors (myself included) have had to answer that question in one form or another.

But I haven’t heard that much talk about why anyone reads romance. Considering that I started reading romance well after my teens, it’s a valid question in my case.

Here’s a crack at it.

I read romance because I love love.

I like to see two people meeting and falling in love, so sue me.

I won’t lie – a part of me is cynical; any of us could live without the other, but it’s nice to watch two people who could probably live without each other choose to be better together.

I like the fact that romance novels have a happy, upbeat ending.

In this day and age when there are so many demands on my time, it’s nice that many romance novels are relatively short reads.

For the same reason, I tend to go for stories that don’t stress me out trying to figure out pieces of a puzzle – not on a week day when I’m trying to get in a few minutes of reading before bed and there’s work the next day.

And if anyone dares to tell me that romance novels aren’t realistic, let me ask you this: how realistic is a story about a man whose daughter has been kidnapped, but just happens to be an ex-operative with special skills in “hunting down people” (made a great story, though, didn’t it?). And, anyway, whose reality are we talking about?

Over to you…why do you read romance?

HE DIDN’T DO SHORT-TERM RELATIONSHIPS…

American ad exec, Thane Aleksander, doesn’t date co-workers either—until business takes him to Ghana, West Africa, and he meets Naaki. Now he’s at risk of breaking all the rules. Can he stop this headlong fall before it’s too late?

UNTIL HE MET HER!

Naaki Tabika has a burning need to prove, to herself and others, that she’s more than wife and mother material. To do so, she’s prepared to give up everything for her job. Meeting Thane, however, makes her want to get personal. But falling for her boss could destroy her career. Will she be willing to risk it all for the one thing that can make her truly happy?

Two divergent cultures, two different races, two career-driven professionals, only one chance at true love—will they find the faith to take it, or will their hearts be sacrificed on the altar of financial success?

Thane knew he was in for it now. He could hardly believe he’d really done it…

He’d kissed Naaki. Kissed her! What the hell was he thinking? Thane tossed his jacket aside and yanked off his tie. Of all the stupid—

Raking his fingers through his hair, he muttered a curse. The urge to hit something assaulted him with a force that should have surprised him. The perfect punching bag would have been his own

body, since it was apparent that he needed to pound some sense into his skull. Right now, the only thing pounding was his heart as it threatened to burst out of his chest, throbbing partly out of anger but mostly from his pulsing desire.

Damned if he didn’t still want her in his arms. She made him feel like a teenager—and not in a good way. Vulnerable wasn’t a desired state of mind as far as he was concerned. He sat down with the adjoining door in full view, still unable to comprehend how he’d dropped his guard. How he seemed so willing to let down his defenses around her.

He’d panicked in the elevator, allowed himself to be captivated. He’d worried about her, touched her as if he cared. She’d kissed him back, moaned against his lips and his knees had gone weak. He could have made love to her right there in the lobby. He could care about her, and caring was the last thing he could afford to do.

Dammit. Naaki wasn’t a woman you got involved with on a whim. He needed, at all cost, to avoid her—the woman who’d so easily brought him to his knees, who’d caused his body to come alive and made him want—

Want to win a copy of the book?

Simply leave a comment answering Empi’s question about why you read romance. Up for grabs is an ebook copy of your choice of either of Empi’s books. Giveaway is open worldwide until midnight EST Apr 19. 2012.