Today I have a guest post from Debbie Christiana about censorship and banned books.

Hi Sarah. Thank you so much for having me as your guest today. I’m Debbie Christiana and I write paranormal romance. I love everything mysterious and unusual but today I decided to write about another subject close to my heart. Censorship.

Banned Book Week is celebrated each year at the end of September, but due to the recent story of Paypal censoring certain books sold by Smashwords, maybe it’s important we talk about this issue more than once a year.

The week began to highlight how important our freedom of speech and freedom of the press is to every American as stated under the First Amendment. This special event is sponsored by the American Library Association, and the Center for the Book in the Library of Congress, as well as many others.

Conservative and religious groups voice their strong opinions, but the number one group(s) who challenge books are parents and School Board members. Each year, PABBIS (Parents Against Bad Books in School) releases a list of books they don’t approve of.

While it’s every parent’s right to prohibit their children to read literature they deem inappropriate, the question is, do they have the right to take it off library or bookstore shelves therefore making it unavailable to the general population.

The reasons books are banned aren’t shocking: The top five are sex, profanity, racism, the occult and homosexuality.

Sex is good fun – a perfectly natural and pleasurable endeavor. When it comes to women having and enjoying sex the banned list goes on forever. Evidently, that’s frowned upon. A couple examples are Lady Chatterley’s Lover and Madame Bovary. Classics on the list for sexual content include The Diary of Anne Frank, The Great Gatsby and Flowers for Algernon.

A few instances on the list for religion and politics are The Lorax by Dr. Suess, The Harry Potter Series, Animal Farm, The Grapes of Wrath, Uncle Tom’s Cabin and 1984.

No one likes to be shown his or her imperfections. We humans have plenty of flaws and failings. Is that why these classics have been challenged or banned? Because they show human nature at its worst? To Kill a Mockingbird and Of Mice and Men,

This list for homosexual content is a long one, but the one book that prompted me to write this article was And Tango Makes Three by Peter Parnall and Justin Richardson. A children’s book, it tells the true story of two male penguins at the Central Park Zoo.

Roy and Silo formed a union, cared for and hatched an egg, then raised the baby penguin together. It was the most banned book of 2006 and 2007 due to some people’s idea it promoted the homosexual lifestyle. In Charlotte, NC, the local school district removed the book after receiving complaints.

Probably the most ironic book on the list is Fahrenheit 451, a book about banning and burning books.

You can find a complete listing of all banned/challenged at the American Library Association’s website. It includes new books as well as classics but most importantly, it’s full of bestsellers. When The Adventures of Huckleberry Finn was banned, Mark Twain supposedly quipped, “that means another 25,000 in sales.”

Nothing causes books to fly off a shelf faster than telling people it’s full of sex, violence, profanity and any other vice they can think of.

You may agree with some, none or all of the books listed, and that’s your privilege. There are genres I prefer not to read, but I would never take away the right of another person to enjoy a story. And that’s what the real issue is. 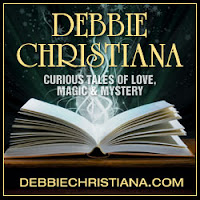 About Debbie Christiana:
Debbie Christiana would sit in her room as a little girl and write stories about ghosts, unexplained events and things that go bump in the night. She combined her love of the paranormal with her fascination of unusual love stories and decided to write paranormal romance. Her novel, Twin Flames, was released in the summer of 2011 with Black Opal Books. In February 2012, her vampire short story, The Land of the Rising Sun, was one of ten included in the anthology BITES: Ten Tales of Vampires. Debbie is a member of RWA and Secretary of the Romance Writers Chapter of Connecticut and Lower New York. She lives in Connecticut with her husband and three children.

She’d never met him before…or had she?
The last thing forty-year old Natalia Santagario expected was to be sitting on a Manhattan barstool ogling a man she’s never met, but swears she knows.

He didn’t know her at all…or did he?
The mysterious dark-haired woman at the end of the bar stops twenty-eight year old Marc Tremonti in his tracks. His head assures him she’s a stranger, but his heart tells him otherwise.

Together they embark on an adventure that will change their lives forever.
Their attraction instant and enigmatic, they undergo past life regression and discover that, not only have they spent hundreds of lives together as lovers, Natalia holds the secret to Marc’s puzzling birthmark. But what should have been a joyful reunion is complicated by a kind, albeit confused, almost ex-wife, a bout of temporary amnesia and a mischievous ghost from their past.What else could possibly go wrong?