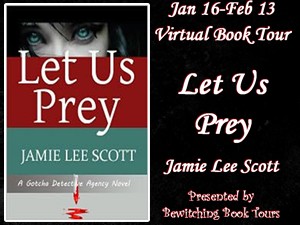 As part of her book tour for Let Us Prey, I have Jamie Lee Scott here today to answer a few questions about being a writer.

What’s your favourite part of writing a book?
Making up my own worlds. Even in non-fantasy based fiction, there is an aspect of world building. I use my hometown as the setting for my Gotcha Detective Agency mysteries, but I’ve changed things up a bit, since I haven’t lived there for 16 years. I still see it the way it was when I left, and I’m keeping it that way in my novels. I don’t actually use any real people, but I tweak people I knew a long time ago, and change their history,  which is great fun. And even better, these people live in my head and I’m not crazy, yet.
What’s the hardest part of writing a book?
This is going to sound crazy, the the hardest part is naming the characters. I’m lucky that my main characters in the series save me from having to name at least 6 or 7 in each novel, but the rest just boggle me. By the end of the novel I’ve used the FIND/REPLACE feature of Word several times. I’d love to be able to name them X, Y, Z, until I feel the character, but it doesn’t work for me. There are name generators available, but in the end the character will tell me his or her name through the personality that develops.
What inspired you to become a writer?
Growing up, I hated English classes, so I never thought about writing. Then in my twenties I went back to college and had to take a course called Critical Writing, and it changed my life. The professor loved my writing and encouraged me, even offering to use my papers as samples for the class. Her name was Dr. Burke, and I have to credit her for being my inspiration. Oh, and I own a restaurant, which is great fodder for the murder mysteries.
What types of prewriting activities do you do? (i.e. research, outlines)
I start with an idea and mull it around in my head for weeks, even months. When snippets come to me, I pull out my recorder (which is always with me) and save the thought. It’s amazing how many very good, and very bad ideas I’ve recorded. Once I have a concrete idea of how I want the book to go I do a bit of research, but not a lot or I’ll never get to the writing process. Then I use the process I learned from the book Save The Cat by Blake Snyder. I hammer out the Plot Points (beats), and buy index cards and write each scene on a card. I rearrange the cards, and even toss a few out, but then I’m ready to go. Next, I develop characters, only I don’t do a bio, I do a “head shot” like for a modeling agency, so I know what my character looks like. I find the characters’ backstory develops with the story. I dislike doing bios because they seem so fake.
What is your favourite part of promoting your book?
Meeting people. Though most of my promo is done online, it’s amazing what I’ve learned and the people I’ve “met.” Twitter is my favorite place, because there seems to be a real dialogue, and we can have fun chatting about everything, not just books. I’m getting ready to do a Twitter party this month. Those are a blast!
Thanks for answering my questions. As a Post-It note lover, I think it sounds pretty cool that you plot using index cards. 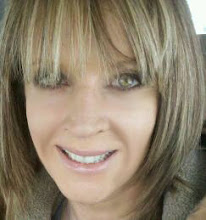 About Jamie Lee Scott:
Jamie was born on the Central Coast of California, where she spent her entire childhood entertaining. She wrote plays and charged admission to her backyard stage so her friends and family could enjoy the performances. She wrote her first novel at the age of 10, for her 5th grade class project. The novel was called Cindy.

Busy with horses and school, Jamie rarely wrote through her teens and twenties, she was living a life most dreamed of (well, she dreamed of anyway), competing at barrel races, hanging out with cowboys, and traveling in rodeo circles with her friends. Money was tight, but life was good. Then Jamie met the man of her dreams. And low and behold he was not a cowboy, but a farm boy. They married and he swept her away to her little piece of heaven in Iowa. Well, then Iowa didn’t turn out to be such heaven, Jamie again turned to fiction. This time she wrote to relieve the stress of living so far from her family, and from running a business with her husband. Funny how she now found it cathartic to kill people, only on paper of course.

Mimi Capurro, owner of Gotcha Detective Agency, has been hired to protect New York Times bestselling author, Lauren Silke, who was recently assaulted in the bathroom at a paranormal conference. Though Mimi is hired to act as bodyguard for Lauren’s upcoming book tour, plans change when Lauren’s assistant is murdered and the slaying is a replica of a scene from Lauren’s newest novel. A novel that hit bookstores the same day as the killing.

Now instead of playing bodyguard, Mimi is cracking computer code, and chasing down vampires. These vampires come alive on the streets of Santa Cruz, as part of a live-role-playing game. Mimi must find the connection between the vampires and the author to track down the killer. This would be much easier if Detective Nick Christianson wanted her investigating the case. Nick, Mimi’s old college fling, is the lead homicide investigator. Though he wants her off the case, he also wants to pump her for information. Nick may have used her in the past, but this time she’ll use him to try to catch the murderer first.