Today I have an interview with Mike Mullin, author of Ashfall. Mike is actually the first author I felt compelled to contact myself, in order to gush about how much I loved the book. Want to know what I gushed about? Check out my 5 star review, posted earlier this year. He very graciously agreed to do an interview and giveaway with me after the book was released, which occured in October.

What prompted you to write a catastrophe story?

I grew up reading dystopian and post-apocalyptic novels. Some of my early favorites included Z is for Zachariah, The Postman, The Day of the Triffids, and Alas, Babylon. So when I started writing for publication three years ago, it was natural that I’d choose to write in that milieu. (I’ve been writing more or less non-stop since sixth grade. But I didn’t decide to try to write a publishable novel until 2008.)

Unfortunately, the first idea that called to me was a YA horror concept. While I was working on that, I happened across a display in my local library that included the lavish, illustrated edition of Bryson’s A Short History of Nearly Everything. It’s an impressively-sized book, but, I thought, nowhere near big enough to merit the title. So I checked it out, and learned about the Yellowstone supervolcano in its pages.

A few weeks later, I woke in the middle of the night with a scene from Ashfall bubbling in my brain. (I know it’s a cliché—the writer dreaming his book—but evidently my subconscious doesn’t care.) I wrote 5,500 words before dawn. When I returned to Ashfall eight months later, after finishing my YA horror novel and researching supervolcanoes further, I realized that the scene I’d written in the middle of the night was junk. Only one word survives from the 5,500 I wrote that night: the title, Ashfall.

Why a story about a volcano?

As I mentioned above, I’ve always loved apocalyptic novels. And while there are great novels set amid floods, tornadoes, tsunamis, earthquakes, Plinian volcanic eruptions, and asteroid strikes, as far as I could determine, nobody had used a supervolcano as a setting for a novel before.

Plus there’s the geek factor—a supervolcano is Mother Nature at her brutal, civilization- destroying worst. What could be more interesting than that?

How do you think you would handle surviving a catastrophe?

I wouldn’t be able to survive the catastrophe Alex faces in Ashfall. And I live in Indiana, where things would initially be much better than in Iowa, where he starts.

The super volcano I depict in Ashfall would directly kill hundreds of thousands, maybe millions. But the bigger death toll would be from global starvation and disease in its wake. Twenty percent of the world’s grain supply is produced in the United States, primarily in areas that would be buried in ash. Globally, we have less than a 60-day supply of stored grain. Starvation would reach epidemic levels very quickly following a supervolcano eruption.

In thinking about who would survive and how, I found this research on the Donner party very useful. I have two strikes against me: I’m too old, and I’m male. Being female roughly doubles your odds of survival in a starvation situation. Women start out with an average of a third less muscle mass and higher body fat than men. So they both need fewer calories to survive and have a greater reserve.

So my odds aren’t good. If the Yellowstone supervolcano erupts tomorrow, my goal will be to try to live the short remainder of my life in a way that helps the younger generation survive and rebuild.

Have you made any personal preparations in the event of potential catastrophes?

Other than learning taekwondo, walking, and biking a lot to stay in decent shape, no. It’s not something I worry about a lot. The survivors of a catastrophe like the one I depict in Ashfall will be worse off than those who die in some ways. And they’ll be younger than I am.

Forcing myself to write even on days when I really don’t want to. I do my best to write every day, including weekends and holidays. It helps keep my head in the story.

I love the freedom and solitude of it. I can pick up my little netbook and write anywhere. Pieces of Ashfall were written in dozens of different locations: restaurants, coffee shops, my house, on airplanes, in state parks, etc.

What inspired you to become a writer?

I’ve written since I was in the sixth grade. After I got fired from every other job I tried, I figured it was finally time to try writing professionally.

I had an interest in volcanoes before I started, but it was the sort of ‘look, shiny!’ kind of interest lots of people have in Mother Nature’s most impressive temper tantrums. I definitely didn’t know enough to write Ashfall without a ton of research.

I started by reading all the books I could find on the subject. Greg Breining’s Supervolcano: The Ticking Time Bomb beneath Yellowstone National Park was particularly useful as was Savino and Jones’s Supervolcano: The Catastrophic Event that Changed the Course of Human History. You can find many of the sources I used on my website. Online resources like the United States Geological Survey website were helpful as well.

From there, I delved into primary sources, reading many of the scholarly articles cited in the secondary sources I read. I found several relevant articles in The Journal of Volcanology and Geothermal Research. I visited the Indiana University Geology Library in Bloomington during this phase, passing myself off as Margaret Mullin (my wife, who is a doctoral student) so I could check out books.

I got stuck at one point during the writing process. The solution: road trip! My wife and I took off for a week in romantic Iowa. We drove every step of the route Alex takes through northern Iowa and Illinois. Many of the scenes in Ashfall were created as a direct result of our trip. Later, I flew to Portland to relearn cross-country skiing and visit Mt. St. Helens.

Finally, I sent a manuscript to two geologists and made numerous changes based on their suggestions. There’s a more detailed discussion of the science behind Ashfall on the OurTime in Juvie blog.

LOL. Thanks so much for graciously accepting my fangirl gushing, and for answering my questions. I’m glad to hear that I have 2 out of 3 things in my favour for surviving a catastrophe.

About Mike Mullin:
Mike Mullin’s first job was scraping the gum off the undersides of desks at his high school. From there, things went steadily downhill. He almost got fired by the owner of a bookstore due to his poor taste in earrings. He worked at a place that showed slides of poopy diapers during lunch (it did cut down on the cafeteria budget). The hazing process at the next company included eating live termites raised by the resident entomologist, so that didn’t last long either. For a while Mike juggled bottles at a wine shop, sometimes to disastrous effect. Oh, and then there was the job where swarms of wasps occasionally tried to chase him off ladders. So he’s really hoping this writing thing works out.

Mike holds a black belt in Songahm Taekwondo. He lives in Indianapolis, Indiana with his wife and her three cats. ASHFALL is his first novel.

Under the bubbling hot springs and geysers of Yellowstone National Park is a supervolcano. Most people don’t know it’s there. The caldera is so large that it can only be seen from a plane or satellite. It just could be overdue for an eruption, which would change the landscape and climate of our planet.

Ashfall is the story of Alex, a teenage boy left alone for the weekend while his parents visit relatives. When the Yellowstone supervolcano erupts unexpectedly, Alex is determined to reach his parents. He must travel over a hundred miles in a landscape transformed by a foot of ash and the destruction of every modern convenience that he has ever known, and through a new world in which disaster has brought out both the best and worst in people desperate for food, water, and warmth. With a combination of nonstop action, a little romance, and very real science, this is a story that is difficult to stop reading and even more difficult to forget.

Buy the book online: Amazon, Barnes and Noble
Want to win some swag? 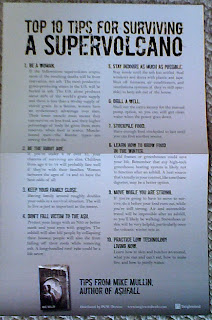 I have an autographed Ashfall poster to give to one lucky reader. Not only will you get Mike’s autograph, but it also has some very cool tips to help you surivive a supervolcano.

To enter, simply leave a comment telling me how you think you’d handle surviving a castrophe.
Giveaway is open worldwide until midnight November 15, 2011.