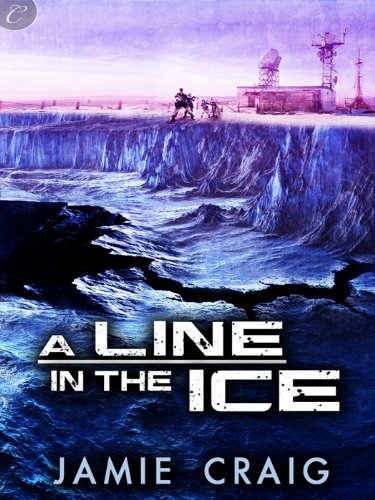 Captain Charlie Weller is part of an elite military unit is charge of watching a rift in the ice in Antarctica. They are all that stand between the world and the monsters who want to invade it. When a man crawls out of the rift, Charlie’s team rescues him. His tale is fantastic, and will change the fight forever.

This story is a fast paced mix of action and romance. It was perhaps a little too fast paced for me. I found the romance to be almost insta-love. Within a day of meeting and rescuing Lysander from the rift, Charlie is sharing a sleeping bag with him. Is this really the way someone would react to a man who crawls out of an Antarctic rift in the ice when the only other things crawling out are monsters?

I found the concept of WWI soldiers going to another (parallel?) world to drive back monsters to be unique and intriguing. I’d love to hear more of this back story. I’d also like to hear more about the citizens in Illyria, and their history.

Overall, I found the book exciting and thrilling. There is non-stop action, both of the battle and sexual kind. There are a few scenes with explicit erotica, which makes it different from most sci-fi stories. The WWI connection adds a unique historical basis to this genre bending story.

About Jamie Craig:
Jamie Craig is the collaboration between novelists Pepper Espinoza and Vivien Dean. Our first novel, “Chasing Silver,” was published by Juno Books in December 2007. Since 2007, we have published eight titles with Samhain Publishing, four titles with Liquid Silver Books, and over three dozen with Amber Quill Press, including two best-selling series. Our urban fantasies “Mosaic Moon” and “Dominion” were two of our six 2008 EPPIE Finalists.

Please vote for my blog in the traffic-breaker poll for this tour. The blogger with the most votes wins a free promotional twitterview and a special winner’s badge. I want that to be me! You can vote in the poll by visiting the official Line in the Ice blog tour page and scrolling all the way to the bottom.

One Response to “A Line in the Ice”