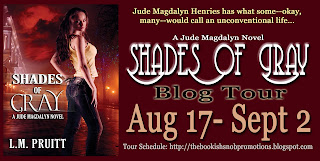 As part of her book tour with Bookish Snob Promotions for Shades of Gray, I have LM Pruitt here with a guest post about writing sex scenes.

Writing sex scenes can range from easy to embarrassing to bang-your-head-against-the-desk difficult. Depending on the market you’re writing for, most authors find themselves bound by rules, both spoken and unspoken. The more mainstream the market, the more circumspect one tends to end up being in regards to something messy, personal, and wholly natural.

Some of that is due, no doubt, to the general Puritanical moral system of America at large. Despite being either a “melting pot” or a “tossed salad”, depending on which cultural school you’re ascribing to, American soceity as a whole is wary and highly critical of overt sexual displays. Think of the moral outrage associated with Britney Spears and her over the top racy videos, or to throw it back a few decades, the uproar over Brooke Shields appearing in Pretty Baby as a child prostitute. And let’s not get started on the cyclical nature of celebrity sex scandals, either through pictures or video.

But why, exactly, are they scandals? For a country that prides itself on freedom of expression, up to and including burning books and other objects, we are remarkably intolerant of an act that most people will experience at some point in their life. So much so, that the Supreme Court had found itself forced to deal with enough cases involving pornography to have “Movie Day”, where they review the movies involved in suits.

The definition of obscenity has changed numerous times over the years, beginning with the Roth test which first came into use in the 1950s. Keeping in mind the general conservative nature of America at the time, the justices set forth the following explanation for judging obscene materials.

Speech which ” . . . to the average person, applying contemporary community standards, the dominant theme of the material, taken as a whole, appeals to prurient interest” and which is “utterly without redeeming social importance…”

After years of misapplication and misinterpretation due to varying community standards, a second definition was set forth in 1973 in the decision for Miller v California, which stands as the current definition (more or less). It is significantly more conservative, something at odds with the counter culture of the era and the continued progression toward individual freedoms. In short, it states something is obscene if:

The major difference between the two definitions comes from the application of community standards. The Roth test worked on a national level, and ended up being more liberal. Miller shifted judgment back to the community, either local or state, where mores vary widely and often are more stringent.

The real issue, and one every artist of every medium has to take into account, is the final criterion–lacking serous literary, artistic, political, or scientific value. Again, what is acceptable in Austin, Texas may not be acceptable in Dayton, Ohio and vise versa. Once an artist makes the decision to offer their work for public consumption, personal preferences become nil and community standards move to the forefront. And so writing or showing or in anyway portraying sex becomes an art. Not just in the craft itself, but in portraying the act while maintaining community standards and falling in line with public opinion.

And here you thought this was going to be risque. Shame on you.

(The information used here regarding obscenity was culled from Movie Day at the Supreme Court or “I Know It When I See It: A History of the Definition of Obscenity by Judith A. Silver)

I will admit I was a little nervous about a guest post on sex, but am surprised at the seriousness of  the topic. Thanks for helping learn something new today.

About LM Pruitt:
L.M. Pruitt has been reading and writing for as long as she can remember. A native of Florida with a love of New Orleans, she has the uncanny ability to find humor in most things and would probably kill a plastic plant. Titles written include New Moon Rising, Shades of Gray, the first novel in the Jude Magdalyn series, as well as Hole in the Wall, a Jude Magdalyn short. She is currently at work on Taken. She makes her home in Florida with one two cats—one smart, the other an idiot.

Want to win a copy of the book?
I have one ebook copy of Shades of Gray to give to a lucky reader. To enter, simply leave a comment. Please remember to include your email address so I can contact you if you win.